When Rosemary found out that her cancer she thought was in remission had spread to her lungs, she decided to take her daughters’ advise and came to speak with Corey Deacon at Neurvana Naturopathic Medicine. Find out how her path changed through one visit.

I’m Rosemary, and I’m a rancher in Central Alberta. The first time I found out I had cancer was in 2015, probably late in the fall of 2014.

So I went in and had treatment for that summer, radiation and chemo at the same time. We got rid of it, but then the following, I think it was a year after that, the following fall, I went in for my routine test, which had been clear, and they saw some spots on my lungs. They decided that probably wasn’t anything, but they wanted to take a look. And it turned out to be that this particular cancer, as unlikely as it was, had spread into my lungs, and I had a few little nodules there.

“I knew really soon that I probably wasn’t gonna survive the treatment, and so I quit. And then I thought, now I have to do something.”

So then it came time to go through maybe treatment a second time, but the treatment plan wasn’t very user friendly, shall we say. I had been always reading up on natural health stuff and believed in healings one’s self.

When I started treatment the second time, I knew really soon that I probably wasn’t gonna survive the treatment, and so I quit. Then I thought, now I have to do something, meanwhile, my daughters had heard Corey Deacon speak, and they said, “Mom, this guy’s for you.” So I went and saw him, and he was.

How was Neurvana Naturopathic Medicine different than other places you went to?

The first thing Corey told me when I told him what I was going through, and what I needed was I’m not gonna treat your cancer, but I am gonna treat your body and your immune system. Let’s let it take care of itself. I said that’s fine with me.

He was able to really explain how the body worked, the body systems. You could just understand. And I thought, this makes perfect sense to me, and I wasn’t gonna do anything else, this was what I needed to do. So I said, yeah, let’s go ahead.

They’re there for you all the time. They’re very open and friendly.

Corey’s one of the smartest men I’ve ever met, yet he can bring things to a level where you understand. I know sometimes he says he should dumb it down a bit, but I’ve asked him not to because even though I may not be able to repeat what he just said, I do understand what he’s saying.

“We saw shrinkage in the nodules which nobody had ever told me I’d have. I feel like I’m 10 years younger… there’s no sick for me, I just don’t feel it.”

No matter how shook up I get sometimes, all of a sudden your confidence or your fear ahold, he’s just calm. And he’s able to say to you, “this is how it’s working, and it’s working good, and things did work.”

We saw shrinkage in the nodules which nobody had ever told me I’d have. I am now two years in. I feel fantastic. I feel like I’m 10 years younger, that alone, there’s no sick for me, I just don’t feel it.

What made you decide it was worth the investment to move forward?

Originally, my daughter had talked to somebody who’s a mother or somebody that was going through some treatment. And there was some numbers suggested, which I thought, oh that was somebody else’s illness.

He (Corey) was upfront with how much the start would cost, and asked me if I had to budget. And I said, “what do you mean?”

He said, “well some people can’t afford some of this.”

Because, for me, this is my life, so money didn’t (really matter), and overall if you spread it out over the couple years.

Has it been an investment? Yes, it has, but it’s worth every penny.

“Has it been an investment? Yes, it has, but it’s worth every penny.”

I know where the money’s going. Somebody said to me, “do you think you’re being ripped off.”

I said “No, ’cause I’ve seen the lab test and I’ve seen the different costs. And so, they accumulate, but they’re for very reasonable things.”

The neurofeedback part which is something that was very new to me really brought about lots of changes. I had lots of problems with fear, anxiety, those kinds of things, I saw those levels come right down.

The chemo had given me memory gaps, and that became way less of an issue.

The diet end of it, which was for inflammation and to control disease and stuff, made me lost 30 pounds. I’m the same size I was in high school, I can do the things I did back then.

Overall it’s just, the whole thing is so integrative, and it just works.

Are you a happier healthier person after working with us?

It calms your brain and you learn how to do relaxation things because the diet helps make you feel better and healthier. It doesn’t hurt to be slimmer, but just because it makes me healthier. That’s all about being healthy.

“The fear’s under control because I know somebody’s helping me deal with the issue of cancer. I firmly believe that I’m going to recover from it.”

I can get out and do the things, I don’t have depression and things. The fear’s under control because I know somebody’s helping me deal with the issue of cancer. I firmly believe that I’m going to recover from it.

Where do you think you’d be if you decided not to invest in yourself and work with us?

Well, by going through the treatment road I was headed down, if I was still alive, I certainly wouldn’t look like this. I’ve watched a close relative, the same age as me, passed away not long before me. I saw her go down that route. There’s not much left of you.

That’s what I ran into when I was going into treatment the second time. I was supposed to have eight rounds of chemo, three weeks each, and by the middle of the second round, I was already as bad as I’d been at the end of my first rounds of chemo.

I just looked down this long pipe and saw myself not making spring, and if I did, there wouldn’t be anything left of me to enjoy.

To me, it was a choice that, if my life was to end, it was gonna end on my terms. But I also knew that I probably wasn’t gonna die because I’m gonna find something else to do. I knew that was out there.

So in finding this, it was just a tool, that helped me go forward with the belief that I can live and overcome this. Yeah, it’s what I needed to do.

I’m not sorry in the least, money’s money, you can always get more.

If you have to do chemo and radiation and this, “cause that’s what you need to believe in”, then you do that.

If you don’t believe in the chemo and radiation, or it doesn’t seem like that’s gonna be the good end result for you. You can do this. 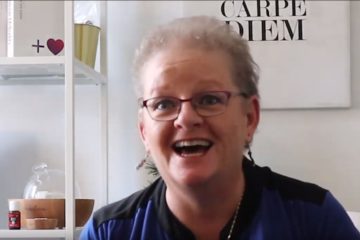